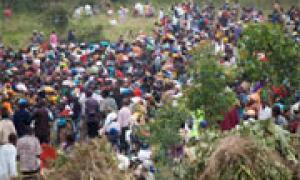 The United Nations today launched a year-long advocacy campaign to help scores of millions of internally displaced persons (IDPs), focusing on mitigating the impact of conflict and natural disasters that drive so many people from their homes within their own country in what Secretary-General Ban Ki-moon has called “one of the greatest humanitarian challenges we face.”

The numbers speak starkly for themselves: 1 per cent of the world’s population, or 67 million people, internally displaced within any given year; an increase of the number of IDPs due to war alone from 19 million in 1998 to over 26 million in 2007; civilians being displaced in conflict zones at the rate of 100 per hour for 10 years.

“The scale of displacement is overwhelming but the numbers only tell part of the story,” Under-Secretary-General for Humanitarian Affairs John Holmes told a news conference. “They do not reveal the extent of violent abuse, desperation, destitution, and despair which often accompanies displacement.

“They do not reveal the fact that many of those displaced in situations of conflict experience multiple displacements, and that each new displacement brings a new round of damaged hope and compounded despair.”

The number of those displaced by natural disasters is also significantly increasing, in part due to the impact of climate change, with large-scale disasters which commonly cause massive displacements quadrupling over the past 20 years. It is estimated that approximately 50 million people around the world are displaced by hurricanes, tsunamis, earthquakes, landslides, and flooding.

Just this year, days after Cyclone Nargis displaced up to 800,000 people in Myanmar, 15 million others were uprooted by the Sichuan earthquake in China.

The campaign marks the 10th anniversary of the adoption of the UN Guiding Principles on Internal Displacement, which unlike refugees who cross national borders, does not have a specific agency dedicated to it, although the UN High Commissioner for Refugees (UNHCR) has increasingly taken on the responsibility.

The Principles stress that the primary responsibility for IDPs lies with the national authorities, but the UN and its partners stand ready to support them in overcoming the many challenges which internal displacement presents.

Mr. Holmes cited preventing and ending internal displacement as the two key areas that require concerted action by all stakeholders. Investment in disaster risk reduction strategies, better preparedness and early warning mechanisms has been proved to reduce the scale of displacement in natural disasters, while the international community must act to ensure parties to conflicts adhere to international law ensuring prevention of arbitrary displacement.

With regard to ending displacement, he stressed that national authorities must allocate sufficient financial and political capital to secure long-term solutions, while the UN and its partners must work more closely together to ensure more predictable support for such efforts.

“Years after a disaster has struck the misery of millions in continuing displacement can be handed down to the next generation, as many of those displaced by Hurricane Mitch (in Central America) more than a decade ago understand only too well,” Mr. Holmes said. “For millions of IDPs around the world, an end to their years of displacement, discrimination, and poverty seems to be of little concern for those in power.”

The campaign will be implemented globally and within selected key IDP countries. The UN and partners in the Central African Republic will be launching their own advocacy campaign in Bangui, the capital, in January and soon after the campaign will be taking off in other countries in Latin America, Africa and Asia.

The top United Nations humanitarian official wrapped up a four-day visit to Chad today during which he called for stronger action to restore stability and rein in criminal activity besetting nearly half a million refugees and internally displaced persons (IDPs) in the strife-torn east.