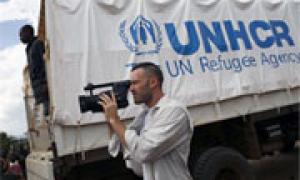 The film – “Gimme Shelter” – set to the Rolling Stones’ song of the same name, was shot last month in North Kivu province, epicentre of the latest surge in fighting.

“We made the film in order to focus attention on the humanitarian crisis in the DRC at a time when too much of the world is indifferent or looking the other way,” Mr. Affleck said at the launching at UN Headquarters in New York. “The suffering and loss we’ve all seen first-hand is staggering – it is beyond belief.”

Gimme Shelter, which aims to raise funds for the UN High Commissioner for Refugees (UNHCR), captures the unseen suffering of Congolese families who fled the fighting with next to nothing and are now forced to find refuge in makeshift huts with little to live on. Some 30,000 others have fled to neighbouring Uganda and are also receiving help from UNHCR.

“The Rolling Stones are very happy to contribute to ‘Gimme Shelter’ in support of Ben’s efforts to raise the profile of the conflict in the Congo,” Mr. Jagger said of the film, which will be distributed worldwide via Internet, television, mobile phones, cinemas and hotel chains. “We all need to stand up and support the work of organizations like UNHCR who are on the ground offering protection and working hard to ensure the rights and wellbeing of refugees.”

UN High Commissioner for Refugees António Guterres thanked all those involved in the campaign for their compassion, concern and commitment. “Their contribution will have a direct impact on the lives of uprooted people not only in the DRC but around the world,” he said.

In a related development, UN Children’s Fund (UNICEF) Goodwill Ambassador Mia Farrow, who has just returned from a three-day visit to the DRC, urged all armed groups in North Kivu to allow aid organizations to provide life-saving assistance to women and children.

“Aid workers themselves are not safe, yet they are doing heroic work under a very difficult situation,” the actress told a news conference in Geneva. “They are deeply concerned about those they cannot reach, particularly the most vulnerable: the women and children. All armed groups must give aid workers immediate and complete humanitarian access…

“What is unfolding in DRC is one of the worst situations I have ever encountered. In their own homes, people are raped, tortured, mutilated and abducted. All ordinary ways of life have been disrupted. People can’t farm, don’t have access to their land, there is no way to get food, children can’t go to school for fear of being raped or abducted. It’s a dire situation.”