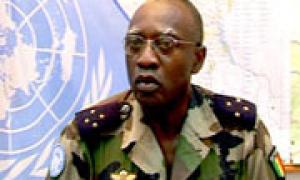 “The task that the blue helmets are fulfilling at this very moment is absolutely vital,” General Babacar Gaye, military head of the UM Mission in DRC, known by its French acronym MONUC, said in an update on the disposition of forces.

But he noted that while the number of troops in itself might seem impressive “and creates expectations among the population,” it also creates a feeling of dissatisfaction when compared to the huge size of the country.

“This dissatisfaction is felt by all those who make up this force when you consider all the protective missions they would like to carry out,” he added.

Meanwhile, Secretary-General Ban Ki-moon’s Special Adviser on the prevention of genocide Francis Deng is assessing whether the continued violence and massive human rights abuses in North Kivu could amount to violations of the Genocide Convention.

Mr. Deng has just returned to UN Headquarters in New York from a 12-day mission to the DRC, Rwanda and Uganda, during which he met with leaders of some of the largest armed groups in eastern DRC. He also held talks with UN and government officials, civil society, the clergy and victims of large-scale human rights violations. Members of his delegation also visited Burundi.

MONUC, which at the moment has more troops on the ground than any other UN mission, was originally set up in 1999 with a mandated force of some 5,500 to help enforce a ceasefire after years of civil war that cost 4 million lives in fighting and attendant hunger and disease – widely considered the most lethal conflict in the world since the Second World War – before it ended earlier this decade.

Since then its forces have been steadily increased and in 2006, the UN helped organize presidential, national and provincial elections, the largest and most complex polls it has ever helped to run. Much of the rest of the country has since been relatively calm, but fighting has continued in the east.

Most recently the Security Council authorized a further temporary increase of nearly 3,000 troops in the face of an upsurge of the conflict in North Kivu, where the national army, the mainly Tutsi rebel National Congress in Defence of the People (CNDP), the mainly Hutu Democratic Forces for the Liberation of Rwanda (FDLR), and other rebel groups such as the Mayi Mayi have clashed in various permutations and shifting alliances.

An estimated 250,000 civilians have been driven from their homes since late August, mainly in North Kivu, creating a humanitarian crisis.

MONUC is also fielding over 3,500 troops in South Kivu and some 3,770 in Ituri to the north, a province that has also been torn by fighting with rebel groups.

Talks between the Government of the Democratic Republic of the Congo (DRC) and a main rebel group are continuing to make headway, according to the top United Nations envoy tasked with helping to resolve the conflict that has engulfed the east of the vast African nation.