Wildlife law enforcement officials are meeting in Kenya as part of a United Nations-backed effort to stop the escalation of rhinoceros poaching and break up criminal networks behind the increasing illegal trade in their horns, used in traditional medicines or as dagger handles.

“The escalation of rhino poaching in recent weeks is threatening the success of conservation efforts undertaken by African and Asian countries over the last 20 years,” said Willem Wijnstekers, Secretary-General of the Convention on International Trade in Endangered Species of Wild Fauna and Flora (CITES), whose secretariat is administered by the UN Environment Programme (UNEP).

“Although rhinoceros populations are increasing in some areas, there is no room at all for complacency,” he added before the opening of the two-day meeting of the CITES Rhinoceros Enforcement Task Force in Nairobi.

CITES banned international trade in rhino horns in 1977. After suffering greatly from poaching in the 1980s and 1990s, some rhino populations started to recover in Africa and Asia following the implementation of conservation programmes.

But armed conflict and political instability in parts of Africa as well as a resurgent demand in Asian markets have been undermining those efforts in some areas. At least 40 white rhinos have been reportedly poached in national parks and game reserves in South Africa this year. In Zimbabwe and Mozambique, the number of illegal killings has increased dramatically over the past few months. As for the northern white rhino found in the Democratic Republic of the Congo (DRC), the situation is critical.

CITES Enforcement Task Forces have previously been established to tackle wildlife crimes related to tigers, falcons and great apes. Outcomes of such meetings have included guidance on gathering and analyzing crime information and intelligence, specialized training, identification guides and awareness-raising materials. The networking opportunities also enable enforcement officers from around the world to collaborate more effectively. 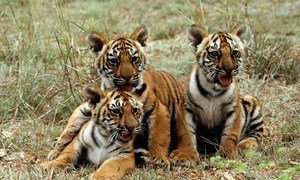 International wildlife trade to be reviewed with UN help

The trade in elephants, rhinos, tigers and mahogany will all be the focus of this week’s meeting of the Convention on International Trade in Endangered Species of Wild Fauna and Flora (CITES) in Geneva, whose secretariat is administered by the United Nations Environment Programme (UNEP).