Nearly three years since its creation, more patience is needed in judging the work of the United Nations Human Rights Council, which is still in an “evolutionary” stage, the body’s President told the General Assembly today.

The Council was set up in 2006 to replace the Commission on Human Rights, which had been dogged by accusations of bias and politicization, as part of ongoing UN reform.

“All too often, and most times without any real justification, the Human Rights Council has been criticized in the manner and outcome of its work. Let me appeal for greater circumspection, objectivity and patience in assessing the work of the Council,” President Martin Ihoeghian Uhomoibhi of Nigeria said.

“Two years is hardly enough time to be overly critical of an institution which we strongly believe holds great promise as a universal human rights body.”

The Assembly decision to establish the Council showed nations’ commitment to boosting the UN’s role in ensuring the enjoyment of human rights for all, said Mr. Uhomoibhi, who was elected for a one-year term in June.

One of the reforms differentiating the Council from the Commission on Human Rights is the Universal Periodic Review, a mechanism to examine the record of every Member State.

“In a very particular sense, the decision to empower the Council to consider human rights situations in all countries, through the mechanism of the Universal Periodic Review, not only emphasized the principle of equality among all states, but also underscored the universality of all human rights,” the President said.

He highlighted some of the Council’s activities to the 192-member body, including the adoption in June of the Optional Protocol to the International Covenant on Economic, Social and Cultural Rights (ICESCR).

The Council has also taken steps to address serious rights issues, with three special sessions being held during the reporting period on the situation in Myanmar, violations in the occupied Palestinian territory and the food crisis.

“Given that we live in a globalizing world where an event in one part has the potential of affecting life in other parts, the Council found it necessary to remain vigilant and seized with all situations namely of growing inequality, continuing armed conflicts or other menaces such as climate change and food crisis,” Mr. Uhomoibhi noted. 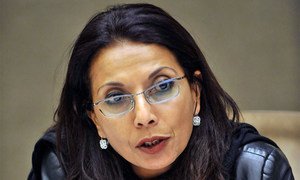 The sexual exploitation of children is a matter for concern in Latvia despite the low number of reported cases, an independent United Nations human rights expert said today, warning that continued vigilance is needed from the State to protect its young.