The United Nations Assistance Mission for Iraq (UNAMI) has launched a nationwide Election Coverage Network, aimed at providing the country’s citizens with timely, fair and balanced information and reporting on its provincial elections.

The United Nations Assistance Mission for Iraq (UNAMI) has launched a nationwide Election Coverage Network, aimed at providing the country’s citizens with timely, fair and balanced information and reporting on its provincial elections.

The six-month project includes the production and dissemination of “Voter Education Radio Programmes” which include information on procedural and technical details of the voting process, in-depth analysis of campaign issues, and parties’ positions and political profiles.

The programmes, which will be made available to a network of FM radio stations nationwide, will also include information on political role and authority of governors and provincial councils, their relation to the central government, as well as election results and results from election monitoring.

The product of a partnership between UNAMI’s Public Information and Electoral Assistance Offices and the international non-governmental organization (NGO) “Media in Cooperation and Transition” (MICT), the broadcasts aim to increase transparency and inclusiveness in the electoral process and to encourage informed debates among citizens in the run-up to and the aftermath of the election.

The projects is just one of the activities being organized by the UN-led International Elections Assistance Team (IEAT) to promote professional, responsible reporting of the elections and to build the capacity of the Iraqi Independent High Electoral Commission (IHEC) to engage effectively and transparently with the media.

Other activities include a national training programme for IHEC officials and local media on election reporting, support for a campaign for journalism safety, and assistance in drafting regulatory frameworks and policies covering IHEC’s media liaison activities.

UNAMI supported the process that led to the passage of the country’s new provincial election law last month by the Iraqi Parliament, which followed months of intense discussions and will now facilitate the holding of the polls this year.

♦ Receive daily updates directly in your inbox - Subscribe here to a topic.
♦ Download the UN News app for your iOS or Android devices.
Iraq|election 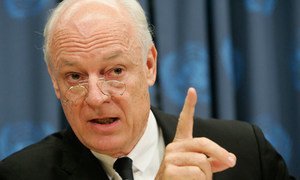 The top United Nations official in Iraq has called on the country’s legislature to reinstate a provision regarding the rights of minority communities into the provincial election law passed last week, stressing that protecting those rights is fundamental to a democratic Iraq.