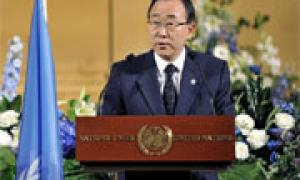 Secretary-General Ban Ki-moon today reiterated his pledge to protect United Nations staff around the world, as he met in Geneva with the families of the victims and survivors of the deadly 2003 terrorist attack on the world body's headquarters in Iraq.

The 19 August bombing of the Canal Hotel in Baghdad claimed the lives of 22 staff, including the top UN envoy in Iraq, Sergio Vieira de Mello, and wounded more than 150.

“I am determined to do all we can to prevent such tragedies from happening again,” Mr. Ban said at a ceremony to commemorate the fifth anniversary of the bombing.

“We cannot eliminate risk, of course,” he added, noting that the world in which the UN operates is growing more dangerous every day.

Following last December's bombing of the UN offices in Algiers, which killed 17 staff, the Organization commissioned the Independent Panel on Safety and Security to do a worldwide review of UN security. Mr. Ban vowed to act on its recommendations.

“Rest assured that I have moved decisively to ensure that we take every possible measure to protect our staff around the world,” he said.

At the same time, he emphasized the need to address the root of the problem. “Too many people in the world do not understand what the UN does, or its role as an impartial friend to all. This remains one of our most significant strategic communications challenges,” he stated.

Today's ceremony follows a commemoration held in New York on 19 August, at which Mr. Ban paid tribute to some of the Organization's “best and bravest” who gave their lives five years ago.

“No words can do justice to what they gave us. No acts can right the injustice of their deaths,” the Secretary-General told those gathered in Geneva, adding that the only way to honour their legacy is to ensure that the UN continues to help the Iraqi people while protecting its staff – there and everywhere.

He pointed out that the UN's work in Iraq continues on many fronts, including helping seek a compromise on the impasse in Parliament and addressing the sensitive issue of internal boundaries.

The world body took another step forward today with the signing of an agreement paving the way for greater cooperation between Iraq and the UN Conference on Trade and Development (UNCTAD) in the areas of trade, investment and enterprise policies.

“We should never forget that Iraq is blessed with exceptional human and natural resources,” Mr. Ban said at the signing. “The mission of the United Nations is to support Iraq fulfilling its own potential for development and stability.

“As we take this step forward in UN-Iraqi cooperation, I hope that all States and partners will support this work, for the sake of those who deserve it most: the people of Iraq,” he added.

♦ Receive daily updates directly in your inbox - Subscribe here to a topic.
♦ Download the UN News app for your iOS or Android devices.
baghdad|19 August