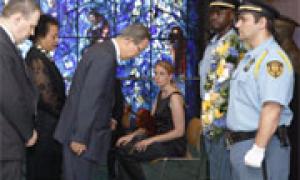 The bombing of the Canal Hotel in Baghdad on 19 August 2003 claimed the lives of 22, including the top UN envoy in Iraq, Sergio Vieira de Mello, and wounded more than 150.

The attack robbed the UN of “some of its best and bravest staff members,” Secretary-General Ban Ki-moon told the gathering, which included family members of the victims as well as survivors of the attack.

“They were true heroes,” he added, noting that they went into a dangerous situation to help those in need.

Mr. Ban noted that over the past five years, the UN has continued to help the people of Iraq – and others throughout the world – including by helping organize historic elections and draft a new constitution in 2005. The world body has also aided Iraqi refugees and is working hard to encourage political compromise among the various communities in Iraq.

“This work is often dangerous, but our resolve is as strong as ever,” he said, adding that all of those who died five years ago “would have wanted us to go on, and we have.”

But the risks remain, Mr. Ban pointed out, as illustrated by the deadly terrorist attack on UN offices in Algiers last December. He reiterated his pledge to improve staff safety and security, while also noting that protection means more than barricades and shatterproof glass.

“By keeping alive the memory of those talented, selfless, compassionate and irreplaceable people we lost five years ago, we remind the world of what the UN stands for. And we recall again why the UN’s work must be protected and supported: for the sake of peace and justice, now and for generations to come.”

Mr. Ban, joined by colleagues who were in Baghdad, laid a wreath in memory of the victims. A minute of silence was also observed in honour of the fallen staff.

Also addressing the gathering was Stephen Kisambira, President of the UN Staff Union, who noted that the world has become a far more dangerous place where the neutrality of the Organization and its personnel is less respected and its staff vulnerable to attacks with each passing day.

“We must stress the obligation of those who call upon United Nations staff to serve in difficult and dangerous parts of the world. We call upon them to take whatever action is necessary to ensure staff safety and security,” he said.

The ceremony featured the world premiere of Song without Borders, a new classical music piece composed by Emmy Award-winner Steve Heitzeg in memory of UN staff members who have perished in the line of duty.

The piece’s four movements are Universal Declaration, Blue Meditation (in remembrance of members of the UN family killed in the pursuit of peace), Unfinished Assignments (for Mr. Vieira de Mello and the people of the world) and Peaceful Resolution. It was performed by the Daedalus Quartet, which is currently the quartet-in-residence at New York’s Columbia University.

At an event in Geneva to commemorate the anniversary, Sergei Ordzhonikidze, the Director-General of the UN Office there, highlighted the great sacrifice made by those killed in the attack.

“The bomb that detonated at Canal Hotel, our Headquarters in Baghdad, robbed us of 22 men and women who had devoted their lives to the United Nations,” he told those gathered at a wreath-laying ceremony. “These staff members assumed great risk in the service of peace, security and of all humanity and paid the ultimate price, their lives.

“The cause for which our friends and colleagues died stays on, and our quest continues, as we go on with our work,” he added.

♦ Receive daily updates directly in your inbox - Subscribe here to a topic.
♦ Download the UN News app for your iOS or Android devices.
baghdad|19 August

A new classical music work called Songs without Borders, composed in memory of United Nations personnel who have perished in the line of duty, will be performed on the fifth anniversary of the terrorist attack against the world body’s Baghdad office which claimed 22 lives.