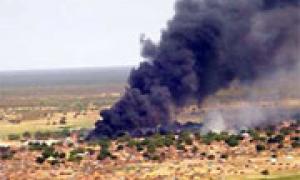 In a statement, Ambassador Zalmay Khalilzad of the United States, which holds the rotating Council presidency this month, said that a peaceful resolution of the Abyei dispute was vital to effectively implementing the 2005 Comprehensive Peace Agreement (CPA) that ended the long-running north-south civil war in Sudan.

On 8 June the National Congress Party (NCP) and the Sudan People’s Liberation Movement (SPLM) agreed to a Road Map for the Return of Internally Displaced Persons (IDPs) and Implementation of Abyei Protocol, including provisions about interim boundaries and revenue sharing.

The plan follows deadly violence last month that led to the destruction of much of Abyei and the sudden displacement of tens of thousands of residents, prompting concern from senior UN officials about the grave humanitarian situation and the threat to the CPA.

In today’s presidential statement, Council members asked Secretary-General Ban Ki-moon to examine the root causes of the violence, the role played by the UN Mission in Sudan (UNMIS) and what follow-up steps the peacekeeping mission should undertake.

They also urged the mission to deploy personnel in and around Abyei as needed to help reduce tensions and prevent an escalation of the conflict.

“The Security Council urges the parties to use the opportunity created by the signing of the Road Map to resolve all outstanding issues related to CPA implementation and welcomes the parties’ commitment to take unresolved issues to arbitration as necessary,” the statement said.

The statement voiced deep regret at the recent fighting, the civilian displacement and the obstruction to the freedom of movement of UNMIS staff. It called on all sides to allow immediate humanitarian relief to be brought to the displaced and support for their voluntary return to their former homes as soon as an interim administration and agreed security arrangements are in place.

The impasse over Abyei, which is still contested by both sides, has been one of the stumbling blocks preventing the full implementation of the CPA, which concluded one of the longest and bloodiest conflicts in Africa.

The head of the Security Council’s recent mission to Sudan today urged the 15-member body to press the parties to the 2005 peace accord which ended the country’s long-running north-south civil war to fulfil their commitments, stressing that the landmark deal is vital to ensuring stability throughout the vast African nation.