Global food aid deliveries have sunk to their lowest levels in nearly five decades, with deliveries of wheat and maize facing the sharpest drops due to the impact of food price rises around the world, according to the United Nations World Food Programme (WFP).

The WFP’s “Food Aid Flows” report, released today, shows that food aid deliveries declined by 15 per cent in 2007, dropping to 5.9 million tons – the lowest level since records began in 1961.

Wheat prices increased by 122 per cent and maize prices by 86 per cent between the years 2000 and 2007, according to the report, meaning that aid agencies had to reduce purchases of these commodities.

The WFP said there was an urgent need to reverse this trend and that immediate action was needed to tackle the negative effects of higher food prices on hunger and malnutrition across the world.

“As a result of higher food prices, vulnerable populations, including children and women in rural and urban areas, are eating less, and eating less well,” the report says. “They are also reducing expenditures on education and health, and possibly selling productive assets to cope with the higher food prices. These consequences are long lasting, sometimes covering a life time.”

The report – which covers the flow of all international food aid, not just that moved by WFP – also found that as food prices increased on international markets, donor governments sought to purchase more food in developing countries.

Earlier this year, WFP faced a shortfall in its budget of $755 million caused by food price rises. The funding gap was only covered after extra donations from more than 30 countries, including one of $500 million from Saudi Arabia. 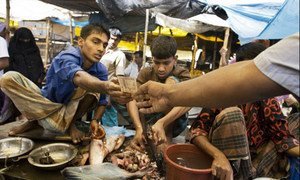 The United Nations World Food Programme (WFP) said today it will provide $1.2 billion in additional food aid in the 62 countries hit hardest by the current crisis resulting from the surge in food and fuel prices.