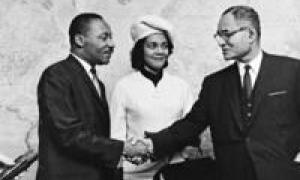 “Dr. King remains an unsurpassed advocate of all the UN stands for: peace, economic and social justice, and human rights,” Mr. Ban told an audience of dignitaries, students, faculty and members of the UN Association of the US in the exhibition hall of the Robert W. Woodruff Library, part of the Atlanta University Center.

The Secretary-General said he was especially inspired by the enduring bravery of Dr. King, who was slain by an assassin’s bullet 40 years ago.

“I will leave here forever impressed by Dr. King’s courage,” said Mr. Ban following a private viewing of parts of the King collection entrusted to the Library.

“He could see the bridge between the terrible injustices in our world and the noble rightness that humanity can achieve. He spent his life building that bridge and marching across it, from despair to hope, from suffering to salvation, from war to peace and from hate to love,” the Secretary-General told the audience, which included two of Dr. King’s children, Martin Luther King III and Rev. Bernice King.

Mr. Ban said Dr. King’s principled bravery resonates at the UN. “As the United Nations strives to tackle the problems raging our world and to realize the principles in the Universal Declaration of Human Rights, we carry in our hearts Dr. King’s unending courage and his unbending conviction.”

While serving as Korea’s Consul General in Washington, DC nearly three decades ago, Secretary-General Ban had travelled to Atlanta to speak about Dr. King. He told the audience at the Atlanta University Center today that his profound respect for Dr. King only deepened over the years.

“Today, my admiration grew even further, as I saw the papers lodged in this Library,” said Mr. Ban. “Seeing the original of ‘Letter from a Birmingham Jail,’ with paragraphs that Dr. King wrote on scraps of paper, I could only imagine what intellectual courage and conviction went into the effort,” he said, pointing out that the now-revered treatise had to be smuggled out from behind bars.

Mr. Ban also viewed documents showing the links between Dr. King and his long-time supporter Ralph Bunche, the UN Under-Secretary-General for Political Affairs who, in 1950, became the first African-American man to receive the Nobel Peace Prize. Dr. King was the second, receiving the honour 14 years later, in 1964.

“What I saw today helped me form a picture of their close relationship,” said Mr. Ban, adding that he had been particularly moved by a letter from Ralph Bunche, on UN stationery, asking Dr. King and his wife to visit him on the way to the Nobel ceremony in Oslo.

During the 1965 march from Selma to Montgomery, Mr. Bunche told supporters at the Montgomery Statehouse that the UN was with them. “In the UN, we have known from the beginning that secure foundations for peace in the world can be built only upon the principle and practice of equal rights and status for all peoples, respect and dignity for all.”

Mr. Ban said those words “capture the conviction underlying the Universal Declaration of Human Rights, whose 60th anniversary we celebrate this year.”

Adrian Carver, Communications Manager for the Robert W. Woodruff Library, agreed that Dr. King’s overall mission was focused on human rights. “Civil rights was part of human rights. He always talked about human beings, and their right to pursue the highest of heights,” she told the UN News Service. “And it’s even more obvious when you look at the foundings of some of the most famous King materials that that was always central among his thinking, his writing and his actions.”

Loretta Parham, the Director of the Robert W. Woodruff Library, said the Secretary-General’s visit underscored the value of preserving history “to be sure that those that come after us have these primary resources to look at and understand our society and understand the values and principles that really built this country and built other countries and built the whole nature of rights for every human being.”

Also while in Atlanta, the Secretary-General met with Georgia’s Governor, Sonny Perdue, praising the steps he has taken to promote conservation. “I applaud your States’ efforts to conserve water, save energy, safeguard lands, prevent litter and promote recycling,” he said at a joint press encounter. “I’m going to share what I’ve learned here in Georgia with leaders and communities around the world.”

In addition, Mr. Ban visited the Centers for Disease Control, which partners closely with the UN World Health Organization on global health issues. He toured the CDC’s Emergency Operations Center and spoke to assembled staff.

During his two-day official stay in Atlanta, Mr. Ban will continue his talks on health at the Carter Center on Friday, where he will meet with former US President Jimmy Carter.

Today, the Secretary-General also spoke to staff and supporters of CIFAL, an Atlanta-based UN office that helps local and national officials strive to reach anti-poverty targets. “We work with Governments all around the world providing training in support of the United Nations Millennium Development Goals,” explained Estrella Merlos, CIFAL Atlanta’s Planning Director.

CIFAL is a part of UNITAR, the Geneva-based UN Institute for Training and Research. The Atlanta branch is one of a dozen CIFAL offices around the world.

♦ Receive daily updates directly in your inbox - Subscribe here to a topic.
♦ Download the UN News app for your iOS or Android devices.
atlanta

Global health will be the focus of Secretary-General Ban Ki-moon’s visit to Atlanta, Georgia, next week, part of his ongoing tour of major cities in the United States.