5 May 2008
On the heels of the recent London meeting of the Middle East diplomatic Quartet, Secretary-General Ban Ki-moon today stressed the United Nations’ commitment to achieving peace in the region and highlighted the steps needed for progress towards that end.

“Israel must halt settlement building in the West Bank. The Palestinian Authority must fulfil its commitment to fight terrorism. The rocket attacks on Israel must stop. The humanitarian suffering in Gaza must end,” he told reporters in New York.

On 2 May, Mr. Ban chaired a meeting of the Quartet, comprising the UN, the European Union, Russia and the United States.

“We agreed that there must be urgent progress, if there’s to be any reasonable prospect of building a Palestinian State living side by side with Israel in peace and security,” he noted.

In a statement issued on Friday, the Quartet expressed its strong support for ongoing Israeli-Palestinian negotiations aimed at reaching a settlement by the end of 2008 that will lead to the establishment of a Palestinian State in West Bank and the Gaza Strip, ending the long-running conflict.

Following that meeting, the Secretary-General attended a session of the Ad Hoc Liaison Committee for the Palestinian Authority, a Norwegian initiative set up in 1992 to ensure that development assistance is used efficiently in relation to the peace process and to contribute to the development of Palestinian society.

In his opening remarks to the gathering, he noted the Quartet’s welcoming of the parties’ continued commitment to talks, but emphasized that “now we must back up these negotiations with real change on the ground – change that allows Palestinians and Israelis to believe in a positive future.”

Mr. Ban also expressed his deep concern over the “de facto separation of the two parts of the occupied Palestine territory” as well as over the ongoing violence in Gaza, which faces a dire humanitarian and economic situation.

“It is obvious that a new strategy is required – one which ensures the passage of people, humanitarian and commercial goods, and which leads to the reunification of Gaza with the West Bank within the framework of the legitimate Palestinian Authority,” he observed.

UN chief ‘deeply distressed’ at plight of Palestinians in Gaza 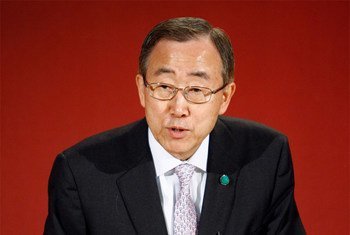 2 May 2008
The Middle East diplomatic Quartet, which includes the United Nations, today expressed its strong support for ongoing Israeli-Palestinian negotiations aimed at reaching a settlement by the end of 2008 that will lead to the establishment of a Palestinian state in West Bank and the Gaza Strip and an end to the long-running conflict.