Condemning today’s loss of civilian life in the Gaza Strip – including the “tragic” deaths of a mother and four of her children – Secretary-General Ban Ki-moon appealed to Israel to exercise maximum care and restraint.

In a statement issued by his spokesperson, Mr. Ban reminded the Israel Defense Forces (IDF) “of its responsibility to protect civilians under international humanitarian law during its military operations.”

The Secretary-General spoke out against the continuing attacks and rockets fired by Hamas today against Israel, calling on it and other militant groups to end such acts of terrorism. He also noted that they should not use Gaza as a base of operations.

“The mounting loss of civilian life in and around Gaza is deeply worrying,” Mr. Ban said, appealing for the situation to calm down immediately.

In a related development, the Palestinian Petrol Association today delivered 55,000 litres of diesel to the UN Relief and Works Agency for Palestinian Refugees in the Near East (UNRWA), according to the Office of the UN Special Coordinator for the Middle East Peace Process (UNSCO).

Today’s supply will allow UNRWA, which has not been able to deliver food supplies for the past three days, to resume its distribution for roughly six days.

However, the agency warned that the fuel delivery does not address the wider humanitarian problems in Gaza; the lack of diesel has impacted doctors’ commutes to hospitals and the ability of teachers and students to reach schools. Additionally, crops are not being irrigated, while cooking gas shortages have forced almost half of Gaza’s 47 bakeries to shut down operations.

UNSCO said that in a bid to come up with a proper distribution plan and the resumption of all services in Gaza, the Petrol Association is seeking a commitment from the Israeli Government for sufficient fuel supplies. 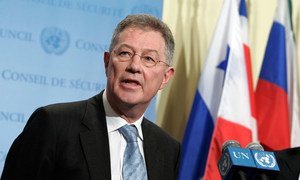 The United Nations Special Coordinator for the Middle East Peace Process (UNSCO) said today that he remains extremely concerned about the severe humanitarian impact that the continuing fuel shortages in the Gaza Strip are having on the civilian population and on basic public services.