3 April 2008
The priority of the inquiry probing the 2005 assassination of the former Lebanese prime minister Rafiq Hariri is to now gather more evidence about the criminal network responsible for the massive car bombing and determine its participants, the head of the investigation says in his latest report to the Security Council.

The priority of the inquiry probing the 2005 assassination of the former Lebanese prime minister Rafiq Hariri is to now gather more evidence about the criminal network responsible for the massive car bombing and determine its participants, the head of the investigation says in his latest report to the Security Council.

Daniel Bellemare writes that the International Independent Investigation Commission (IIIC) has accumulated evidence indicating that the criminal network had conducted surveillance of Mr. Hariri before he and 22 others were killed in the bombing in downtown Beirut on 14 February 2005, and that “at least part of the [so-called] Hariri network continued to exist and operate after the assassination.”

Mr. Bellemare says the IIIC is also trying to establish the links between members of the network and any others outside the group, and what role the network has played in other deadly attacks against prominent figures in Lebanon in recent years.

The commission is also continuing to pursue its investigation of the identity of the suicide bomber in the Hariri case, drawing on forensic information obtained and an analysis of the missing person files of various countries to generate possible leaders. DNA profiling is being carried out as well.

The report, published today, notes that progress has been made in several other investigations, including the attacks that targeted Major General François al-Hajj, killed in a car bombing last December, and Major Wissam Eid, murdered after a roadside explosion in late January this year.

“In the new cases, the Commission is working on a profile of the targeted victim and possible motives for the attack,” Mr. Bellemare writes.

He concludes in this report that the IIIC’s investigation “must continue to be guided solely by the facts and by the evidence. Its conclusions cannot rely on rumour or assumption; they must be supported by reliable evidence that will be admissible before a tribunal.”

Secretary-General Ban Ki-moon and the UN are taking steps to set up the Special Tribunal for Lebanon to try those responsible for the death of Mr. Hariri and last month Security Council members welcomed a report that showed Mr. Ban is making significant progress.

A headquarters agreement has been signed with the Netherlands, a prosecutor and a registrar has been appointed, and a management committee has been established. Financial contributions and pledges have also come from several UN Member States.

Once it is formally established, it will be up to the Special Tribunal to determine whether other political killings in Lebanon since October 2004 were connected to the assassination of Mr. Hariri and could therefore be dealt with by the tribunal. 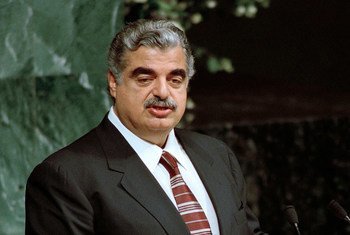 28 March 2008
Evidence shows that a criminal network was responsible for the massive car bombing that killed the former Lebanese prime minister Rafiq Hariri and 22 others in Beirut in February 2005, the International Independent Investigation Commission (IIIC) says in a new report to the Security Council.