UN Photo/Evan Schneider
Ban Ki-moon meets with families of the victims and survivors in Algiers.
11 January 2008

The top United Nations security official today submitted to Secretary-General Ban Ki-moon a report on last December’s deadly terrorist attack in Algiers which claimed the lives of 17 – and injured 40 – of the world body’s staff.

While in the country, Mr. Veness and Mr. Dervis also ensured that those injured in the bombing were given the necessary medical care and that the families of those killed were receiving the proper support, both psychological and financial.

For their part, the UN Department of Safety and Security (DSS) deployed security professionals to coordinate with the country team on ongoing security matters, while the UN Medical Service facilitated the hospitalization of those affected in Algiers, even evacuating injured staff to Paris and Geneva.

During his visit to Algeria several days after the attack, the Secretary-General paid tribute to the dedication and professionalism of the UN staff there, and met personally with all survivors and victims’ families.

“Terrorism is terrorism. It is unacceptable,” he told reporters on his visit to Algiers. “It is a crime against humanity. It can never be justified under any circumstances.”

While in the country, Mr. Ban was given the tattered flag that had flown outside the UN’s Algiers offices, which he brought back to UN Headquarters in New York to symbolize the world body’s determination to work in Algeria.

He also met with President Abdelaziz Bouteflika, to whom he asked that the UN receive the proper level of security in the North African nation.

The Secretary-General has fully approved the decision of UN agencies to disburse three-month salary advances as needed to the victims. He also encouraged the move to give initial financial assistance – above and beyond insurance payments – to the injured and the families of the deceased.

♦ Receive daily updates directly in your inbox - Subscribe here to a topic.
♦ Download the UN News app for your iOS or Android devices.
Algiers|terror

Secretary-General to appoint independent panel to look into Algiers attack 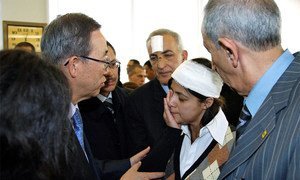 One week after a deadly car bombing claimed the lives of 17 United Nations workers in Algiers, Secretary-General Ban Ki-moon today visited the site of the attack and met with the world body’s staff, paying tribute to their dedication and professionalism.