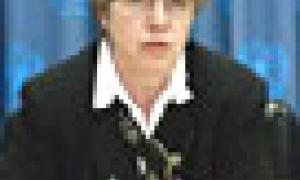 The United Nations envoy for Burundi, Carolyn McAskie, today called on political leaders to refrain from violence or incitement as Burundians move on to much-delayed elections after having approved a national constitution earlier this year.

They urged political leaders to respect the code of conduct for political parties and the media, refrain from acts of intimidation and commit themselves to accept election results once they are approved by the Independent National Electoral Commission (CENI).

Ms. McAskie is the Special Representative of the Secretary-General heading the UN Operation in Burundi (ONUB), set up last May to help cement a multi-party, power-sharing government, pave the way to peace in the tiny Central African nation torn asunder by conflicts between Hutu and Tutsi ethnic groups and provide technical and logistical aid to CENI.

Secretary-General Kofi Annan's report to the Security Council in March said the postponement of the referendum on the constitution to February from last November delayed the whole process, which had been scheduled to culminate "with the indirect election of the President by Parliament on 22 April 2005."

"While considerable progress has been achieved, political tensions in the country remain, affecting trust between the parties. Sectarian and individual interests continue to characterize and influence the peace process," he wrote then.

He renewed his call to all political and military leaders to stay the course, to respect the letter and spirit of the Arusha peace accord, negotiated by former South African President Nelson Mandela, and to conclude the transitional process expeditiously and in good faith.