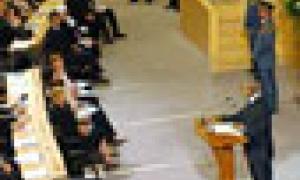 The terrorist bombing of the United Nations headquarters in Baghdad one year ago has forced the world body to wrestle with fundamental questions regarding security, Secretary-General Kofi Annan said today at a solemn ceremony in Geneva marking the anniversary.

Mr. Annan told the gathering of staff, relatives and friends of some of those who were killed that the Baghdad attack was a “unique blow,” notwithstanding that many UN peacekeepers and civilian staff have died in service, including 17 in the past year.

“It brought us face to face with danger in a new and more intimidating form - the danger that we, servants of the United Nations, will no longer be victims simply by virtue of the times and places in which we are called to serve, but may have become in ourselves one of the main targets of political violence,” he said.

“How do we operate in places like Iraq and some parts of Afghanistan, where many people want and expect us to help - including the Security Council - But some are determined to block our work at any price?”

An independent inquiry ordered by Mr. Annan in the wake of the bombing found that the UN's security management system at the time was dysfunctional.

In his speech today, the Secretary-General said efforts are being made to “correct our own systemic weaknesses” and pledged to “always insist on the most stringent precautions for our staff” in order to prevent another tragedy.

He said the UN would press on with its work, while noting that despite the ongoing investigation by the United States, “we are still waiting for answers.” In the meantime, he said the best tribute to the victims is to carry forward in their stead. “Every day we work to further the cause of peace, we feel beside us those we have loved and lost, and we pay tribute to the cherished memory of those who perished one year ago today.”

A minute's silence was observed in honour of the victims following Mr. Annan's speech to the ceremony, one of several held across the globe to mark the tragedy.

♦ Receive daily updates directly in your inbox - Subscribe here to a topic.
♦ Download the UN News app for your iOS or Android devices.
19 August