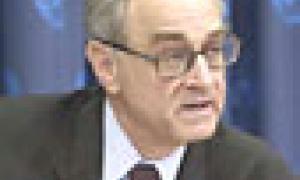 Denouncing "the large-scale inter-ethnic violence" that has led to the deaths of at least 31 people in Kosovo since yesterday, the United Nations Security Council today called for the province's authorities to ensure that the rule of law is maintained, all ethnic communities feel properly secure and the perpetrators of crimes are brought to justice.

In a statement read out by Ambassador Jean-Marc de La Sablière of France, which holds the Council's rotating presidency for this month, the 15-member body also condemned the attacks on staff from the UN Interim Administration Mission in Kosovo (UNMIK) and the troops of the Kosovo international security force (KFOR).

The Presidential statement was read out after a Council debate about the situation in Kosovo, which has faced the worst public unrest since the UN took over its administration nearly five years ago.

Speaking at the outset of the session, UN Secretary-General Kofi Annan told the Council, "We cannot close our eyes to the fact that this violence is ethnically motivated, with communities attacking each other." He said they highlighted how fragile Kosovo remains despite the progress made since the war of 1998-99.

Mr. Annan described the deliberate targeting of residential houses and religious sites as "shameful and inexcusable."

The Secretary-General also said he especially wanted to remind the leaders of the Kosovo Albanian community, the province's biggest ethnic group, of their responsibility to protect and promote the rights of all Kosovars, particularly its minorities.

In the Presidential statement, the Council offered its full support to UNMIK, KFOR and the Secretary-General's Special Representative for Kosovo, Harri Holkeri. It also welcomed moves to strengthen the international security presence there.

Mr. de La Sablière said in the statement that all parties in Kosovo should remain calm, avoid inflammatory behaviour and use peaceful and democratic channels - such as the UN and Kosovo's Provisional Institutions of Self-Government (PISG) - to resolve their grievances.

He said the Council wanted to emphasize that legal investigations were underway into the shooting of a Kosovo Serb teenager in Pristina and the deaths of three Kosovo Albanian children in Mitrovica.

Serbia and Montenegro's Foreign Minister, Goran Svilanovic, said the violence towards Kosovo's Serbs was designed to send a signal that they should leave and that UNMIK and KFOR have no real authority over the province.

Mr. Svilanovic called for the strengthening of international forces and extra measures to protect Serbs, who he said were preparing to escape to central Serbia. He said "Albanian extremism and terrorism" was responsible and had to be stopped.

The Foreign Minister also said that Serbia and Montenegro's international borders with Albania and the former Yugoslav Republic of Macedonia (FYROM) must be secured to prevent "groups of armed terrorists" from coming in to Kosovo "with large quantities of arms and other military equipment."