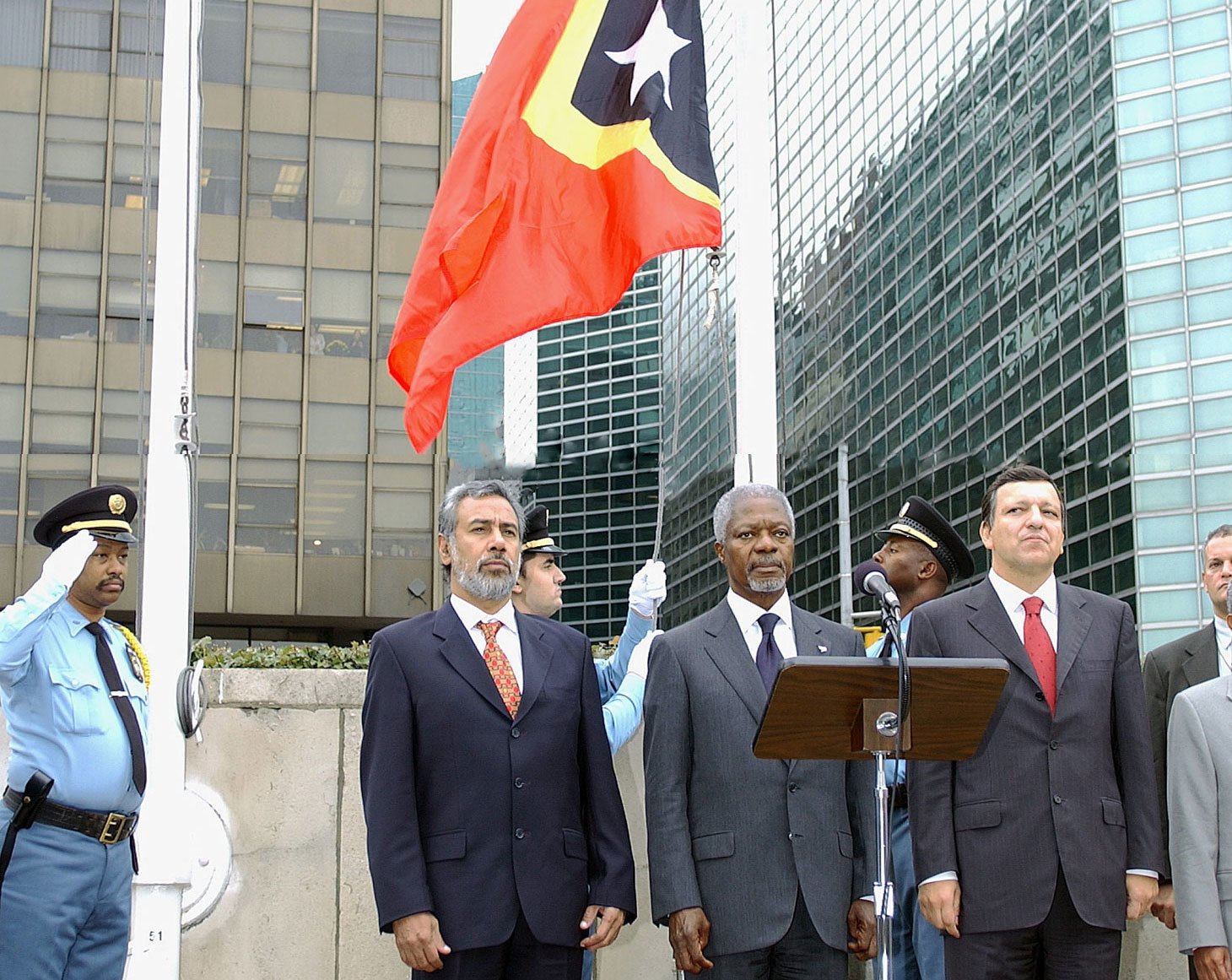 UN Photo/Mark Garten
The flag of Timor-Leste is raised to join those of other Member States in a special ceremony to mark the occasion at UN Headquarters. (September 2002)
27 September 2002
UN Affairs

More than three years after the Timorese people voted to begin the process of independence from Indonesia, the General Assembly today voted to admit the Democratic Republic of Timor-Leste as the 191st Member State of the United Nations.

More than three years after the Timorese people voted to begin the process of independence from Indonesia, the General Assembly today voted to admit the Democratic Republic of Timor-Leste as the 191st Member State of the United Nations.

“This milestone embodies the realization of its people’s hope to take their place among the community of independent nations,” Secretary-General Kofi Annan said at a ceremony to raise the Timorese flag outside UN Headquarters in New York.

“None of us can forget the sacrifices made by the people or the courage of its leadership,” Mr. Annan said. “Even before this day, Timor-Leste showed that greatness among nations is not a matter of size or resources, but rather one of global citizenship and adherence to the highest principles of our Charter.”

The admission of Timor-Leste, formerly East Timor, follows that of Switzerland, which was admitted on 10 September after its citizens passed a referendum in March in favour of joining the world body.

Earlier Friday, in his address to the Assembly, President Xanana Gusmão expressed gratitude for the commitment of the international community to Timor-Leste. He said that his country often has been mentioned as a “UN success story” and acknowledged the contribution of the international community, “namely that of the United Nations and its bodies, the General Assembly and the Security Council,” as well as UN specialized agencies.

“At the core of this success, were, above all, our people,” he said. “Our people proved to the world to be worthy of the respect that we all owe and know.”

For his part, Assembly President Jan Kavan of the Czech Republic noted that while Timor-Leste’s path to independence had not been easy, the country and its people had succeeded, with the UN playing an integral role in the independence process.

Independence, however, did not mark the end of UN involvement in Timor-Leste, he said. Instead, a new phase had begun – one in which previous achievements should be consolidated and built upon. The establishment of the UN Mission of Support in East Timor (UNMISET) provided an example of this continued engagement, and the United Nations and its Member States should be prepared to increase their support in helping Timor-Leste and the region to address some remaining issues.

Meanwhile in Dili, the capital of Timor-Leste, the Secretary-General’s Special Representative and head of UNMISET, Kamalesh Sharma, issued a statement congratulating the nation on its admission to the UN. “The unfurling of the flag of Timor-Leste, alongside those of other members of the United Nations, would be the beginning of a new voyage, together with other members of the world community, towards social progress and advancement, and better standards of life in larger freedom,” he said.

“Timor-Leste is second to no nation in supporting the Organization’s principles and purposes, of promoting and encouraging respect for human rights and fundamental freedoms for all,” he added. “The visionary leaders of Timor-Leste are committed to achieving this goal, and I am convinced that the UN and the international community will continue to be supportive of their national efforts towards further development and progress.