By 2050, some five million people could die each year in Asia alone due to resistance to antibiotic medicines or antimicrobials, according to UN agencies.

Many antibiotics are no longer effective in fighting infections as those infections have built up resistance to the medication.

Deaths due to antimicrobial resistance (AMR) could surpass annual cancer fatalities, a situation which the UN has called a “global health emergency.”

The UN agencies, which include the Food and Agricultural Organization (FAO), the World Health Organization and the UN Environment Programme called for the more responsible use of antibiotics in humans, animals and agriculture at the opening of World Antibiotic Awareness Week (WAAW) in Asia and the Pacific on Monday, 12 November.

The main message of the awareness week this year is “handle antibiotics with care,” focusing on action plans to prevent infections in livestock, aquaculture and crop production while promoting good farming and food safety.

The UN Food and Agriculture Organization (FAO) defines antimicrobials as drugs which prevent and treat parasitic, bacterial, viral and fungal infections. However, overuse by health practitioners and misuse in the agricultural sector means they are no longer effective in fighting many infections.

Antibiotics can end up in soil, water and the environment at large, giving microbes further opportunity to build up resistance FAO Assistant Director-General and Regional Representative for Asia and the Pacific, Kundhavi Kadiresan, pointed out.

The UN considers AMR as a priority health issue to be tackled with as much urgency as Ebola and HIV.

The three UN agencies have partnered with the World Organization for Animal Health (OIE) as the FAO launches a new publication looking at ways to combat the threat of AMR.

♦ Receive daily updates directly in your inbox - Subscribe here to a topic.
♦ Download the UN News app for your iOS or Android devices.
farmers|FAO|antibiotic resistance|health|agriculture 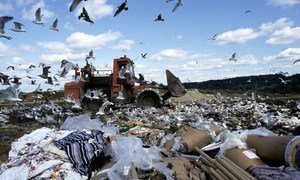 Growing antimicrobial resistance linked to the discharge of drugs and some chemicals into the environment is one of the most worrying health threats today, according to new research from the United Nations that highlights emerging challenges and solutions in environment. 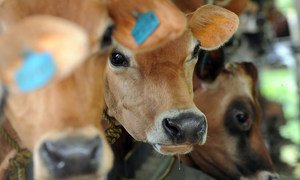 Efforts to stem the spread of antimicrobial resistant pathogens on farms and in food systems are gaining strength, thanks to strong backing by governments and technical support from the United Nations to boost national capacities, the Organization's food security and health agencies reported Friday.