The ongoing conflict in South Sudan must be brought to an end to ease the humanitarian suffering of a steadily growing number of people in the country, the United Nations top relief official underscored after a recent visit there.

Some 7.6 million people need aid across the world’s youngest nation, South Sudan, after long-simmering a political rivalry between President Salva Kiir and his former deputy Riek Machar erupted into full-fledged conflict in December 2013.

More than half of those in need – nearly 4.3 million – are displaced, including about 2.5 million who have fled to neighbouring countries. In addition, there is growing food insecurity, as well as the threat of deadly diseases such as cholera and malaria.

At the same time, the country is one of the most dangerous for humanitarian workers. Last year, 30 aid workers lost their lives – making it the deadliest year for aid workers on record. In addition, at least 1,159 humanitarian access incidents were reported, up from 908 in 2016 and 909 in 2015.

Against this backdrop, Mark Lowcock, the UN Emergency Relief Coordinator, recently went to the country to draw attention to the crisis, as well as drum up international support for the ongoing relief effort.

In Part 1 of our exclusive interview with Mr. Lowcock, who is also the Under-Secretary-General for Humanitarian Affairs, UN News asked him about his mission and greatest humanitarian needs on the ground.

This interview has been edited for clarity and brevity.

UN News: Mr. Lowcock, you just left South Sudan. What are the greatest challenge on the ground?

Mark Lowcock: The single biggest challenge is the fact that the conflict is going on and the consequences of the conflict are getting worse. There is fragmentation of the country as the Government is unable to provide peace and security in very large parts of the nation, which means that people are displaced.

As the conflict has gone on and worsened, the numbers of people in need of assistance has simply continued to grow

There are millions of people displaced within South Sudan, and also millions of refugees [outside its borders]. That means that their previous livelihoods – typically, rural farming livelihoods where they were able to sustain themselves have gone, and they are becoming increasingly reliant on international assistance.

Last year, the UN reached 5.4 million people inside South Sudan with humanitarian assistance. But as the conflict has gone on and worsened, the numbers of people in need of assistance has simply continued to grow.

UNMISS/Eric Kanalstein
Emergency Relief Coordinator Mark Lowcock meets with children at the a primary school at the UN House Protection of Civilians site in Juba, South Sudan. More than 3,000 children attend the school, which is supported by an NGO.

UN News: Can you tell us how your Office, OCHA, and the UN Mission in South Sudan (UNMISS), are coordinating relief efforts, and what is the importance of security for the internally displaced people as well as for enabling effective aid delivery?

Mark Lowcock: I think UNMISS is doing an absolutely crucial job in South Sudan. Certainly, the humanitarian operation – which is a big, complex and successful operation in terms of the number of people it reaches – would not be able to operate without all the collaboration we had with UNMISS. And I was really pleased to see David Shearer, the Special Representative of the Secretary-General for South Sudan, in the capital Juba. We had excellent discussions.

UNMISS also plays a crucial role in protecting civilians in the Protection of Civilian (POC) camps. And I visited some of those camps and talked to people who have basically sought refuge – often against violence from other members their own community or other ethnic groups.

The protection of civilians camps are not fantastic places in terms of the resources and the facilities. But if you have nowhere else to be, they do at least have the feature of being safe

The POC camps are not fantastic places in terms of the resources and the facilities [available there]. But if you have nowhere else to be, they do at least have the feature of being safe. So, that is a crucial role that UNMISS plays.

One of the other major challenges we face is that South Sudan is the world’s most dangerous place to be an aid worker: More than 100 have been killed in violence since the war began and there has been a growing spate of kidnappings of aid workers, including a number of kidnappings, with people being held while I was there.

UNMISS plays an important role in helping sustain an environment where, despite these problems, the aid agencies can stay and deliver. But what we need to see is more effective action by the Government and others, and compliance by all the parties in South Sudan to the basic provisions of international humanitarian law – in particular, protection for aid workers, who are simply trying to relieve people’s suffering.

UN News: You mentioned high levels of displacement within the country, but there are also close to 2.5 million South Sudanese displaced outside its borders. What is the UN doing to help them?

Mark Lowcock: I met some of those refugees in Kenya and [when I was there,] in Sudan. We have a very big UN appeal to raise resources to support them [which] Filippo Grandi, the UN the High Commissioner for Refugees, and I launched together in Nairobi a few weeks ago. We need to get that appeal better funded.

But I must say I was impressed by the support Mr. Grandi’s office (UNHCR) is giving to refugees. This is an important area of activity for the UN. The country which is bearing the biggest burden of South Sudanese refugees is Uganda, and that’s where the biggest UN operation is to support them.

UN News: Before we wrap up, is there anything you’d like to add?

Mark Lowcock: Well, my biggest takeaway […] from South Sudan – the number one message – is we need to find a way to bring the conflict to an end, and the UN is determined to do everything we can to support [the regional bloc] Intergovernmental Authority on Development and the African Union (AU) with that.

In Part 2 of our exclusive interview, UN News will speak with Mr. Lowcock about his mission to Sudan, which he visited just prior to South Sudan. 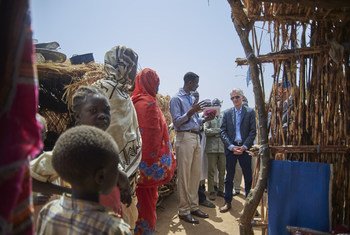 Even though conflict – the major driver of the crisis in Sudan – is subsiding and there is improved access for relief workers, humanitarian assistance “is not the answer” to the challenges plaguing the country, the United Nations top relief official has said. 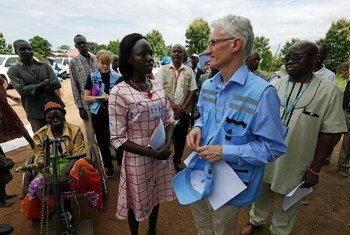