Pakistan: One of the longest-serving and largest contributors to UN peacekeeping

UN Photo/Christopher Herwig
A Pakistani medical officer serving with the UN Mission in Liberia (UNMIL) examines an infant in a maternity ward in Tubmanburg in February 2009. 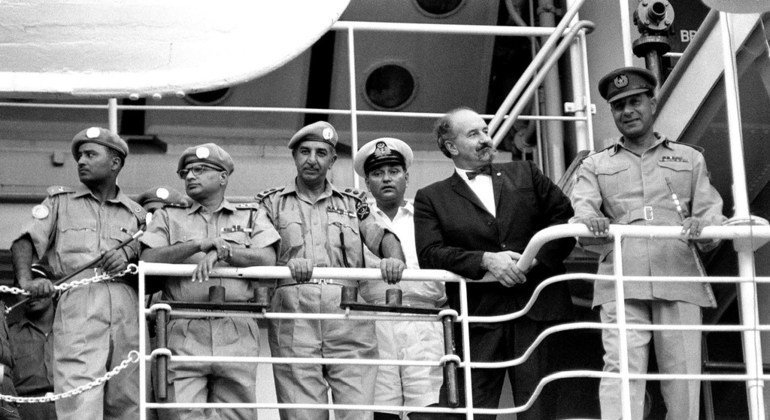 Pakistan has a long history with UN peacekeeping, having been one of the largest contributors of troops and police for decades. In this photo, Brigadier-General Said-Uddin Khan (right), Commander-in-Chief of the UN Security Force (UNSF) George J. Janecek and several Pakistani Officers are viewing, from the bridge of a ship, the departure of about 100 Pakistani soldiers serving with the UN Security Force in West New Guinea (West Irian). Troops serving with UNSF were beginning to withdraw in preparation of the transfer of administration from the UN to Indonesia on 1 May 1963. 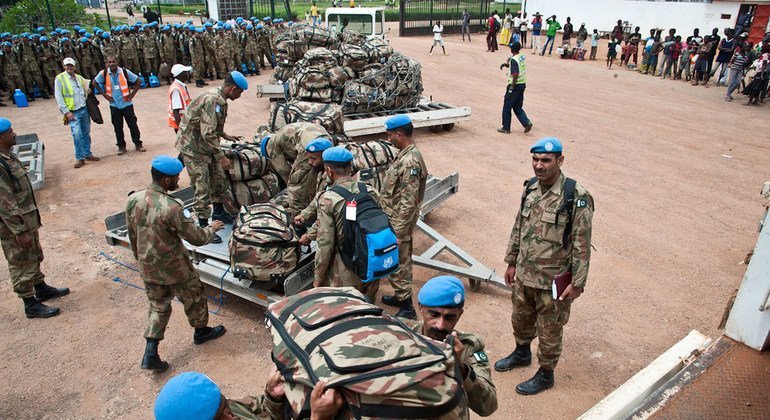 Pakistani women and men currently serve in seven UN operations, with the vast majority of them deployed in the Democratic Republic of the Congo (DRC), the Darfur region of Sudan and the Central African Republic (CAR). Pakistani peacekeepers serving with the UN mission in CAR (MINUSCA) are seen here arriving in the capital, Bangui, in September 2014. 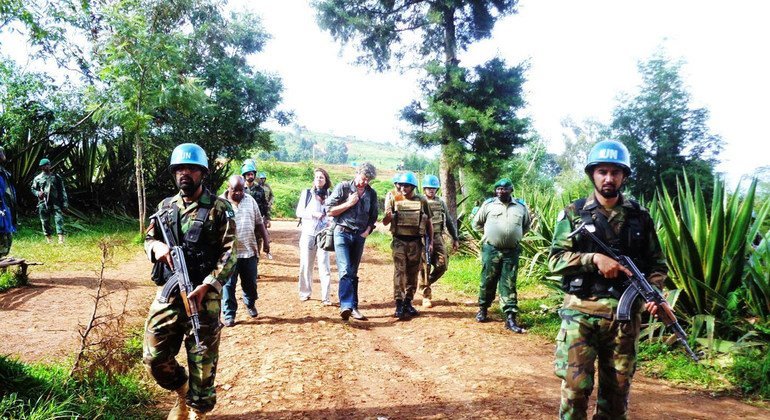 As of February 2018, Pakistan is the fifth largest contributor of uniformed personnel to United Nations peacekeeping, with more than 6,000 men and women serving under the UN flag. UN peacekeepers in the DRC are tasked with protecting civilians and facilitating humanitarian assistance. Pakistani troops are seen here providing escort to NGO and media personnel in South Kivu in January 2015. 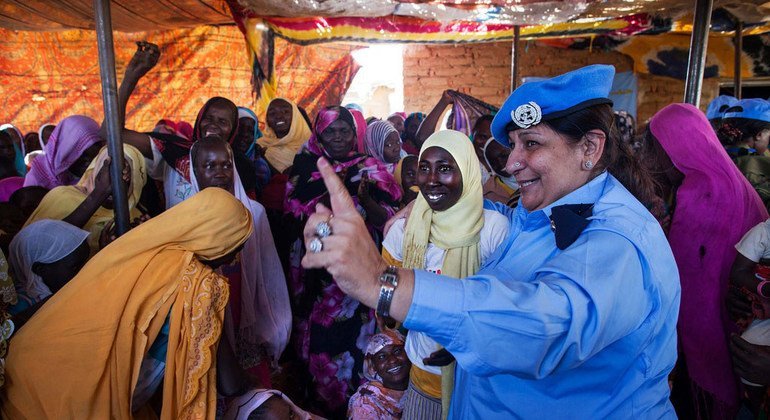 Farkhanda Iqbel, a Pakistani police officer serving with the Joint UN-AU peacekeeping mission in Sudan’s Darfur region (UNAMID), attends the opening ceremony in March 2014 of the El Raman Women Shopping Centre. The Centre, located in the Abu Shouk camp for internally displaced persons, was built through the efforts of UNAMID police and is run by nearly 100 women, who make and sell their handicrafts to the community. 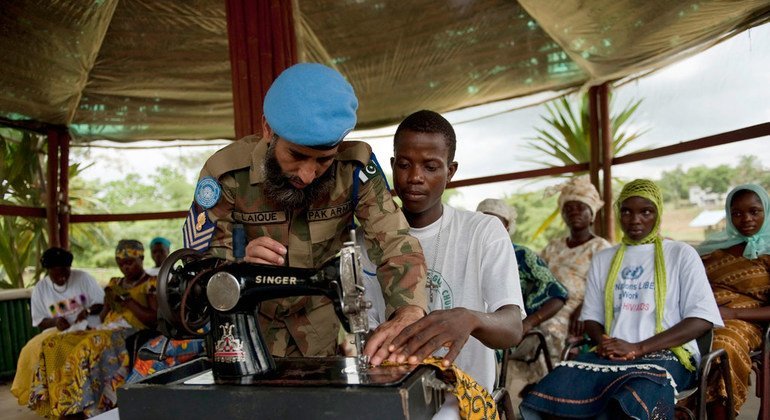 The Pakistani contingent of UNMIL provided technical and vocational skills training, including tailoring and computer literacy, for the local population, which was emerging from a brutal civil war. Seen here is a Pakistani peacekeeper teaching a young Liberian to sew as part of the programme offered in Tubmanburg in May 2010. 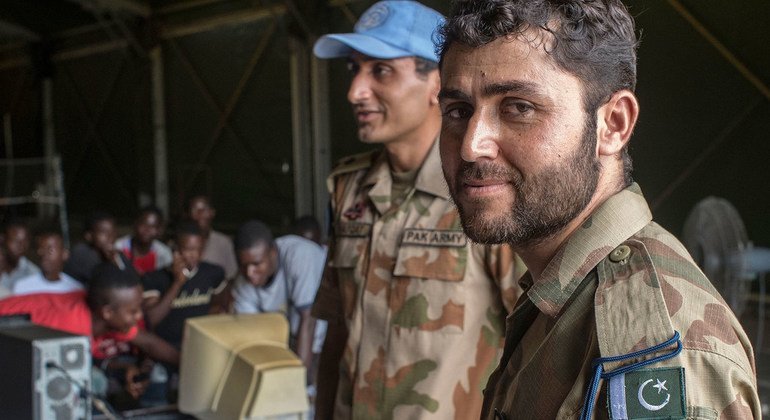 Seargent Saif (right), Signal Technician serving with the Pakistani battalion of UNMIL, along with Lt. Shafqat, are seen here at Camp Clara, the battalion’s headquarters outside of Monrovia, where they are conducting a five-day computer course for young Liberians in June 2013. 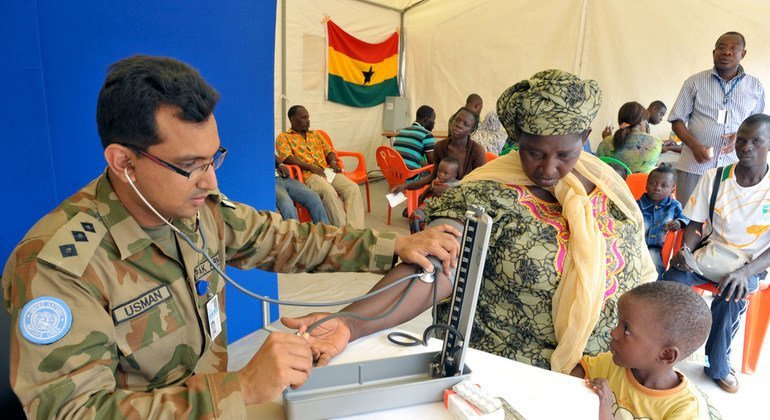 A member of the Pakistani contingent of the UN Operation in Côte d'Ivoire (UNOCI) is seen here providing medical consultations to civilians in Korhogo, in the country’s Poro Region, in May 2014. Over the course of 13 years, UNOCI also facilitated an inclusive political dialogue, strengthened the National Commission on Human Rights, and helped to disarm 70,000 combatants and re-integrate them into society. The mission completed its mandate in June 2017. 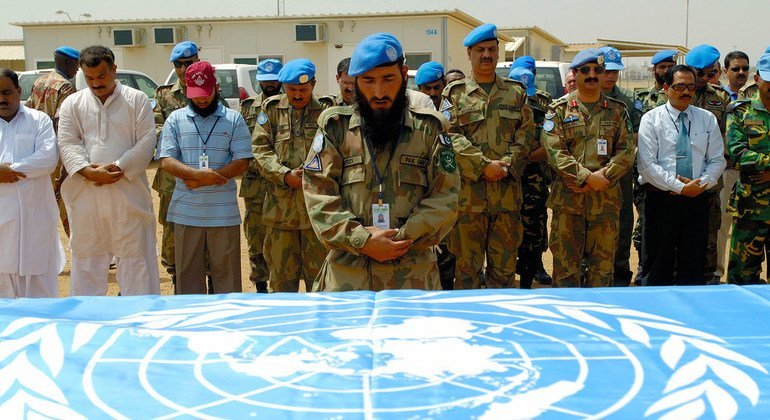 Pakistan has lost 148 peacekeepers throughout its history in UN peacekeeping. Seen here is Private Johar Nafees (centre), a member of the Pakistani contingent of the UN Mission in Sudan (UNMIS), leading a prayer during the farewell ceremony in Khartoum for Sergeant Nazir Ahmed, who died in the line of duty in October 2006.