In an interconnected world, multilateralism is essential: New Zealand PM


It can be hard for a national leader to get noticed at the General Assembly High Level week, taking place at UN Headquarters in New York.

This wasn’t a problem for New Zealand Prime Minister Jacinda Ardern, who made global headlines as the first leader to bring a baby into the chamber.

Speaking to UN Social Media’s Charlotte Scaddan in the VIP Social Media Zone, Ms. Arden described what her Government is doing to tackle some of the big global challenges, from gender equality to climate change to migration.

Charlotte started by asked her what she hoped to achieve at the General Assembly. 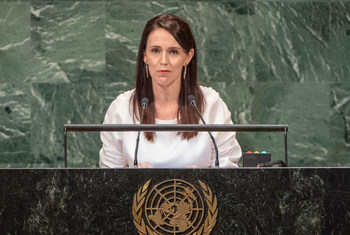